ABOUT THE ARROW SERIES

Arrow is an American superhero television series developed by Greg Berlanti, Marc Guggenheim, and Andrew Kreisberg based on the DC Comics character Green Arrow, a costumed crime-fighter created by Mort Weisinger and George Papp, and is set in the Arrowverse, sharing continuity with other Arrowverse television series. The series premiered in the United States on The CW on October 10, 2012, with international broadcasting taking place in late 2012 and primarily filmed in Vancouver, British Columbia, Canada. Arrow follows billionaire playboy Oliver Queen (Stephen Amell), who claimed to have spent five years shipwrecked on Lian Yu, a mysterious island in the North China Sea, before returning home to Starling City (later renamed “Star City”) to fight crime and corruption as a secret vigilante whose weapon of choice is a bow and arrow.

The series takes a new look at the Green Arrow character, as well as other characters from the DC Comics universe. Although Oliver Queen / Green Arrow had been featured in the television series Smallville from 2006 to 2011, on The CW, the producers decided to start clean and find a new actor to portray the character. Arrow focuses on the humanity of Oliver Queen, and how he was changed by the 5 years he was presumably shipwrecked on an island.

Arrow has received generally positive reviews from critics. The series averaged about 3.68 million viewers over the course of the first season and received several awards and multiple nominations. To promote it, a preview comic book was released before the television series began, while webisodes featuring a product tie-in with Bose were developed for the second season. The first six seasons are available on DVD and Blu-ray in regions 1, 2 and 4; a series of soundtracks was also released. 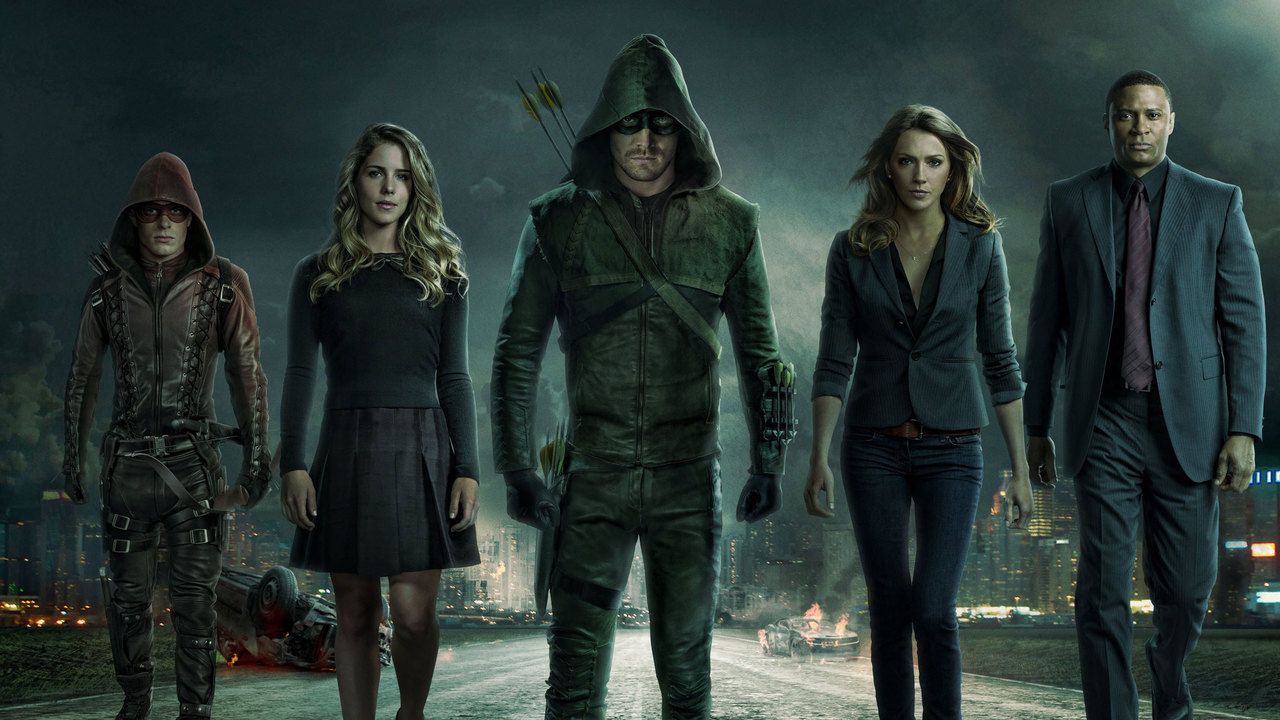 In October 2014, a spin-off TV series titled The Flash premiered. This was first extension of the shared universe that would be known as the “Arrowverse”. The Flash was later followed in 2015 with Vixen and Supergirl, in 2016 with Legends of Tomorrow, in 2017 with Freedom Fighters: The Ray, and in 2019 with Batwoman, which are all part of the same shared universe.

The seventh season premiered on October 15, 2018, and concluded on May 13, 2019, with a total of 22 episodes. As of 2019, 160 episodes have been broadcast. In January 2019, The CW renewed the series for an eighth season, which is set to premiere on October 15, 2019. In March, it was announced this would serve as the final season of the series, consisting of ten episodes which would contribute to the “Crisis on Infinite Earths” crossover event.

The series follows billionaire playboy Oliver Queen, who claimed to have spent five years shipwrecked on a mysterious island, before returning home to Starling City.

In the first season, Oliver returns to Starling City and is reunited with his mother, Moira, his sister, Thea, and his friend, Tommy Merlyn. Oliver rekindles his relationships, while spending his nights hunting down and sometimes killing criminals as a vigilante, known as The Hood. He uncovers Malcolm Merlyn’s conspiracy to destroy “The Glades”, a poorer section of the city that is overridden with crime. John Diggle and Felicity Smoak assist Oliver in his crusade. Oliver also reconnects with ex-girlfriend, Laurel Lance, who is still angry over his role in her sister, Sara’s, presumed death, while her father, Officer Quentin Lance, suspects Oliver of being the vigilante. The season features flashbacks to Oliver’s first year on the island, and how it changed him, while trying to stop a mercenary force targeting the Chinese economy. After being saved by The Hood, Roy Harper attempts to find him so he will train him so he can help others.

In season two, Oliver has vowed to stop crime without killing criminals, using “The Arrow” as his new name to represent that, and is aided by John and Felicity. Oliver’s vow is tested when he comes under attack from Slade Wilson, a man from Oliver’s time on the island who resurfaces with a vendetta against him. Oliver grows to accept aspiring vigilante Roy Harper as his protégé, and receives assistance from Quentin. Oliver also gains another ally, Sara Lance, who survived her ordeal at sea six years prior. Meanwhile, Diggle occasionally assists his wife Lyla Michaels in missions with the Suicide Squad, a group of expendable criminals, tasked by A.R.G.U.S. leader Amanda Waller. The season features flashbacks to Oliver’s second year on Lian Yu, where he faces a new threat from Dr Anthony Ivo, whilst continuing to struggle to survive alongside allies Slade and Sara, and the archer Shado. The origins of his feud with Slade is revealed.

In season three, Oliver’s company Queen Consolidated is sold to businessman, scientist and aspiring hero Ray Palmer, who changes the company’s name to Palmer Technologies and hires Felicity as Vice President. After Sara is found murdered, Oliver becomes embroiled in a conflict with Ra’s al Ghul. He struggles to reconnect with his sister, Thea, who knows Malcolm is her father. Laurel sets out to follow Sara as the Black Canary. Meanwhile, John becomes a father and struggles as a family man. The season features flashbacks to Oliver’s third year since he was presumed dead, where after escaping Lian Yu, he is forced to work with Waller in Hong Kong. Oliver and Tatsu Yamashiro work to stop corrupt general Matthew Shrieve from unleashing a pathogen, which Ra’s al Ghul acquires in the present.

In season four, Oliver and Felicity try and start a new life in Ivy Town, but return to the city, now renamed Star City, when a terrorist group known as H.I.V.E., headed by the mystically enhanced Damien Darhk, is attacking the city. Oliver resumes vigilantism under the new moniker of “Green Arrow”. John discovers his brother Andy is alive and a H.I.V.E. soldier; Thea works with Oliver as “Speedy”, but with a violent temper; Laurel attempts to resurrect Sara using the Lazarus Pit; and Curtis Holt aids Felicity and the team. Oliver’s life as a vigilante and with Felicity are complicated by his mayoral run and the discovery of the existence of his son, William. Laurel dies in a fight with Damien, and Oliver discovers his plan to detonate nuclear weapons and rule the Earth’s remains. The season features flashbacks to Oliver’s fourth year since he was presumed dead, where Amanda Waller sends Oliver back to Lian Yu to infiltrate Shadowspire, where he meets John Constantine and encounters a mystical idol used by Darhk in the present-day narrative.

In season five, Oliver trains a new group of vigilantes, Rene Ramirez / Wild Dog, Curtis Holt / Mister Terrific, Evelyn Sharp / Artemis, and Rory Regan / Ragman to join his war on crime following Laurel Lance’s death and Diggle and Thea’s resignation. He also recruits a new Black Canary; former police detective Dinah Drake. Oliver tries to balance vigilantism with his new role as mayor, yet is threatened by the mysterious and deadly Prometheus, who has a connection to Oliver’s past. Oliver is also forced to contend with Prometheus’ ally Black Siren, an Earth-2 criminal doppelganger of Laurel. The season features flashbacks to Oliver’s fifth year since he was presumed dead, where he joins the Bratva in Russia as part of a plot to assassinate Konstantin Kovar. There, he meets and is trained by Talia al Ghul, as a hooded archer, before returning to Lian Yu.

In season six, after an explosive battle on Lian Yu, Oliver must balance being a vigilante, the mayor, and a father to his son, William. At the same time, new enemies emerge, initially led by terrorist hacker Cayden James, who allies himself with various criminals including drug dealer Ricardo Diaz, metahuman vigilante Vincent Sobel, Russian mobster Anatoly Knyazev, and metahuman Black Siren. As James loses control of his cabal, Ricardo Diaz comes to the fore and kills him, revealing that he manipulated James into believing Oliver killed his son, and announcing to Green Arrow his scheme to take over Star City’s criminal underworld and control the city’s political infrastructure, all while Oliver must contend with his former teammates forming a rival team. As Diaz takes control of the city, Oliver is forced to recruit the aid of the FBI, in exchange for him publicly announcing his identity and going to federal prison. In the finale, Oliver is imprisoned in a maximum security penitentiary.

In season seven, five months after Oliver’s imprisonment, Diaz has recruited the Longbow Hunters, consisting of Kodiak, Silencer, and Red Dart for a new criminal agenda, including seeking revenge on Oliver’s loved ones and allies. After Oliver is released from prison, taking down Diaz in the process, he and the former members of Team Arrow are deputized and begin working alongside the police. Another hooded archer, revealed later to be Oliver’s half-sister, Emiko Queen, emerges as the new Green Arrow, seemingly to fight crime on Oliver’s behalf. However, Emiko is revealed to be the leader of the Ninth Circle, a terrorist group that launches several attacks upon Star City, and is seeking to destroy Oliver’s legacy as the Green Arrow. Emiko kills Diaz. The season features flash-forwards twenty years into the future to Oliver’s now adult son William who seeks out Roy Harper on Lian Yu, where they discover instructions left by Felicity leading them back to Star City. They discover more secrets, including Oliver and Felicity’s hidden daughter, Mia, while they work to save the city from another attack.

In the eighth and final season, Mar Novu / the Monitor recruits Oliver to aid him in his mission to prevent the coming Crisis in which Oliver is suppose to die in. He sends Oliver to Earth-2 to retrieve dwarf star particles before it is erased as Laurel escapes with Oliver back to Earth-1. Oliver wakes up in Hong Kong where he is tasked by the Monitor to retrieve biophysicist Dr. Robert Wong who after, is placed in A.R.G.U.S. custody. In flash-forwards, right after J.J. kills Zoe, Mia, William, and Connor are mysteriously teleport to present day Star City. When Oliver and John discover Lyla is working with the Monitor, they are placed in a shared time loop so that Laurel can properly say goodbye to Quinten and that Oliver can accept his death in Crisis. They then awaken on Lian Yu, which has become a supernatural hotspot, where they use the required items from previous missions to create a weapon only to be activated by Lyla’s DNA. After she activates it, she is summoned by the Monitor. As red skies begin to loom over Lian Yu, Lyla returns to inform Oliver that Crisis has begun. During Crisis, Oliver sacrifices himself to ensure the survival of the people of Earth-38, which is consumed by an anti-matter wave. In Purgatory, Oliver chooses to become the Spectre in order to stop the Anti-Monitor instead of resurrection. In the final battle, Oliver fights the Anti-Monitor in a final battle, which results in a new universe being born at the cost of his life. He later dies in Barry Allen and Sara Lance’s arms.